REFLECTIONS ON THE SPACE NEEDED BY MAKERS, PART III: MOVING TO SAN SEBASTIAN AND THE PROS OF AN OUTSIDE-THE-HOME STUDIO SPACE + TURKISH INTERVIEW!

Part III on my series on the space needed by makers! :-)

When I decided to move to San Sebastián in 2010, I knew that I would not have the option of working from home as I did in Paris, as the flat where I would live simply did not have a sufficient amount of space available, and I was also acutely aware of being clearly in need of a space where I could focus on going back to making music, far away from the potential distractions of home, whether that meant replying to emails, getting the laundry done, or trying that new cake recipe (I was really passionate about cooking back then!). I went in search of the ideal “local” (the Spanish word for ground floor or basement spaces not intended for living), no easy task given how insanely expensive San Sebastián already was, and ended up finding one in a neglected area of my neighbourhood: even though it stank of mould (it hadn’t been used in years and was formerly a brinery distributing olives and guindilla peppers to the local bars), I immediately felt drawn to its high wooden ceiling and overall feel. It also seemed like just the right amount of space, with 21m2 downstairs, and a mezzanine of roughly the same size, high enough for me to stand up, welcome my ceramics, vinyl and music book collection, and instrument cases – and more crucially, this mezzanine could act as a “cushion” protecting the 1st floor neighbours from the sound of my music. It was also really close to where I lived, and a mere 5 minutes walk from the Zurriola beach – what more could I want?

We set about “improving” it as best as we could, with a super conservative budget given that I initially thought I wouldn’t necessarily spend many years there, and you can see our work in the 3 before/after pictures. The doors were from the 1940s, so to say they were drafty is an understatement,  half of the ground was just bare ground and so uneven we couldn’t even add flooring and had to make do with just covering it with some kind of aluminium-coated material and bamboo carpets, and the mould problem never did go away: the city is built on sand, meaning most ground level places have damp rising from the ground.

In spite of all these flaws, the place provided me with what I needed most: concentration. I had no smartphone at the time, and the place had no internet connection: when I went there, the only thing I could possibly make was music, and so I did. I also found that the fact I was paying rent each month on that space meant that I felt guilty when not using it, and this also pushed me to show up and use the space even when I felt I’d rather just take some time off. 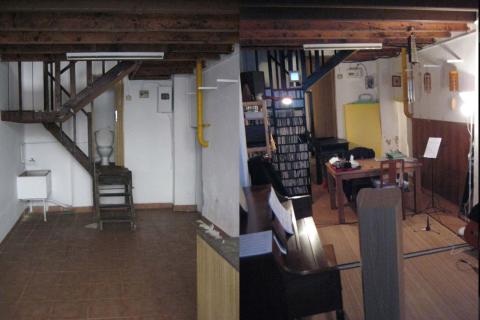 Having more space meant that I was able to slowly upgrade in all the necessary areas (near field monitors with sub and PA with sub were especially game changers) and buy instruments I wouldn’t have dreamt of having in a flat, such as a floor tom. Even more crucially, I finally felt and knew no one could hear me, which gave me the psychological freedom to try the things I was afraid of trying in my flat, starting with singing, and then learning percussion. The next step was discovering the joys of rehearsing on a real PA with my amplified treble viola da gamba and discovering the power of bass once I added an octaver pedal to my viola for Captain of None.

I can safely say that without this space, my music wouldn’t have evolved the way it did.  But renting this space was not without problems, and that’s what I’ll tell you about in the next instalment.

In other news, I’ve had the great pleasure of being interviewed lengthily for Turkish magazine T24!
The photo is one I took in a small side street of Istanbul, I love the sweet calm poetry emanating from this mural painting, and hope I will be back soon in this incredible city :-)

Thanks for reading as always! 😊

You are currently reading REFLECTIONS ON THE SPACE NEEDED BY MAKERS, PART III: MOVING TO SAN SEBASTIAN AND THE PROS OF AN OUTSIDE-THE-HOME STUDIO SPACE + TURKISH INTERVIEW! at colleen.