Recently going through some family photos, I once again came upon this Christmas 1984 polaroid. 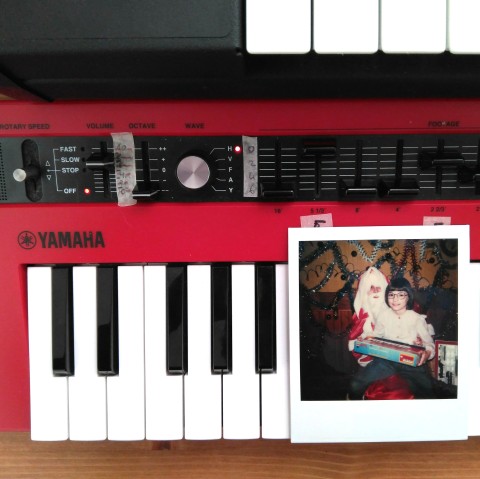 I already shared this picture a couple of years ago on my Facebook and website as part of a series on keyboard instruments in my albums: this Bontempi organ is the first instrument I ever asked for and owned, aged 8. I am sharing it again because it recently struck me as a beautiful coincidence that my one and only melodic sound source for the 7th album I’m working on right now is an eerily similar-looking grown-up version of my Bontempi: the Yamaha Reface YC is red, small and humble-looking, but boasts 3 octaves instead of 2 (now that’s what I call progress!) and thankfully not the same sound (listen to “Organ Song 1995” on my Bandcamp if you want to hear what my Bontempi sounded like on a slowed down 4-track tape recorder, one of my very first solo recordings).

But most of all it’s the world of possibility contained in that moment of holding that precious first instrument that I want to connect with right now. When making music becomes your profession, an at first imperceptible and later more obvious downward slide is almost inevitably bound to occur: your passion-activity somehow becomes not just something you want to do, but also something you *have* to do, because if you don’t, at some point you’ll be out of the job you created for yourself (more thoughts on this in my epic back-from-silence posts from 2011 here and here). There is no miracle cure or easy way out of this feeling, but one thing I strive for is reconnect as much as possible with what it means and feels like to try something for the first time, that primal joy that stands and exists on its own, unadulterated by comparison with anything or anyone. It was just me making some melodic noise back then, and 36 years later I know I still want the same :-)

You are currently reading BEGINNER’S MIND at colleen.